Mergers & Amalgamations under the Companies Act, 1956


The terms merger and amalgamation have not been defined in the Companies Act, 1956 (hereinafter referred to as the Act) though this voluminous piece of legislation contains 69 definitions in Section 2.

The terms merger and amalgamation are synonyms and the term ‘amalgamation’, as per Concise Oxford Dictionary, Tenth Edition, means, ‘to combine or unite to form one organization or structure’.

The provisions relating to merger and amalgamation are contained in sections 390 to 396A in Chapter V of Part VI of the Companies Act, 1956. Any proposal of amalgamation or merger begins with the process of due diligence, as the proposal for merger without due diligence is like entering a tunnel with darkness growing with each step. The due diligence process makes the journey see the light at the end of the tunnel – the light of wisdom to amalgamate or not. Presently, the High Court enjoys powers of sanctioning amalgamation matters under section 394 of the Act though it is a matter of time when this power will be exercised by National Company Law Tribunal, a forum where Chartered Accountants shall be authorized to appear.

Mergers --------- M --------- Marriages
De-mergers -----D --------- Divorces
The beginning to amalgamation may be made through common agreements between the transferor and the transferee but mere agreement does not provide a legal cover to the transaction unless it carries the sanction of High court for which the procedure laid down under section 391 of the Companies Act should be followed for giving effect to amalgamation through the statutory instrument.

Who can apply:
Ø  Company itself
Ø  Creditors
Ø  Members
Ø  In the case of a company which is being wound-up, the liquidator.
„
Approvals and sanctions required from:
o    Dual criteria for approval from members- more than a special resolution„
Ø  majority of members/creditors, as the case may be, in number
Ø  representing three-fourth in value
o    Sanction from the High Court

STEPS for Merger & Amalgamation:
o   To prepare the draft scheme of amalgamation/arrangement.
o   To get the valuation report for the purposes of Shares Exchange Ratio
o   To hold Board Meeting for
·         Taking note of the valuation report
·         Taking note of the share exchange ratio,
·         Taking note of the draft scheme of amalgamation
·         Authorizing someone to sign all the application, petition, affidavits etc. on behalf of the company.
· Filing of application before the Hon’ble High Court under section 391 of the Act for
convening/dispensing with the meetings of shareholders and creditors of the applicant
companies.
· Order of the High Court for convening of the meetings of the shareholders/creditors and
appointment of Chairman.
The Judge gives directions (Form No. 35) in respect of the following matters:-
o  Determining the class or classes of creditors and/or of members whose meeting or
meetings have to be held
o   The time and place of such meeting
o   Appointing a chairman for the meeting(s)
o   Fixing the quorum and the procedure to be followed at the meeting(s)
o   Notice of the meeting and the advertisement of such notice
o   The time within which the chairman of the meeting is to report to the Court the result of the meeting
o   Such other matters as the Court may deem necessary
o   Such other matters as the Court may deem necessary.

·     To finalize the draft notice of meetings of the creditors/shareholders (Form No 36).
Find form 36 http://www.companyliquidator.gov.in/Form-036.pdf...
·   To get the notice of the meeting & Explanatory Statement approved from the Chairman
appointed by the Court & Registrar of the High Court
·  To send the notice (Form 36) individually to the shareholders / creditors along with copy
of the Scheme, Explanation Statement, Form of Proxy (Form No. 37) at least 21 clear days
before the date fixed for the meeting.
·   To give advertisement in the newspaper at least 21 clear days before the date of the meeting (Form No 38)
Find form 38 http://www.companyliquidator.gov.in/Form-038.pdf
· Chairman to file affidavit stating that the directions regarding the issue of notice of
advertisement & dispatch of notices have been complied with (at least 7 days before the date
of the meeting).
· To convene meetings of the shareholders/creditors - Pass the Resolution with requisite
majority
·    File Form MGT-14 with ROC within 30 days of passing of resolution.
· The chairman of the meeting(s) shall submission its Report within 7 days after the conclusion
of the meeting to the Court in after the conclusion of the meeting to the Court in Form No 39.
·  To file petition for obtaining sanction of the Court for the scheme along with all Annexure at
the High Court for confirming compromise/arrangement Form No. 40 within 7 days of filing
the Chairman’s Report.
·         Notice of the hearing shall be advertised in the same papers in which the notice of the meeting was advertised, or in such other papers as the Court may direct, not less than 10 days before the date fixed for the hearing.
·    To follow up with the RD, ROC and OL for submitting their reports that affairs of the Transferor Company and Transferee Company are not prejudicial to the interest of the members or to public interest
·       To ensure that RD and OL submit the report with the High Court before the final date of hearing (Guidelines by MCA in next slide).
·        To file certified true copy of the order within 30 days with the Registrar of Companies (e-form- INC-28).
·         To annex copy of the order of every copy of the Memorandum of the transferee company.

STEPS FOR MERGER & AMALGAMATION: As given below 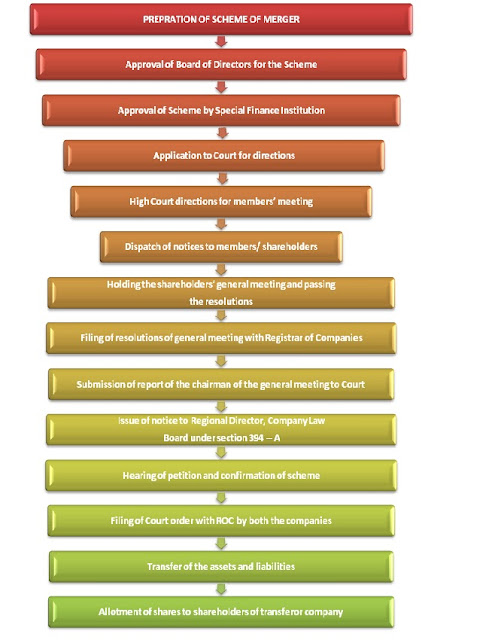 THESE RULES SHALL BE CITED AS THE COMPANIES (COURT) RULES, 1959, AND SHALL COME INTO FORCE ON THE 1ST DAY OF OCTOBER, 1959:
http://www.mca.gov.in/Ministry/actsbills/rules/CCR1959.pdf

CONTENTS OF THE SCHEME
o   Particulars about transferee and transferor companies;
o   Appointed Date (controversy as regards Appointed Date was set to rest by the Supreme Court in Marshall Sons & Co case)
o   Effective Date
o   Capital Structure Capital Structure
o   Objective of Amalgamation
o   Vesting of property form the Appointed Date
o   Share Exchange ratio Share Exchange ratio
o   Manner of conduct of business of Transferor Companies between the Appointed Date and Effective Date
o   Effect of amalgamation on contracts/litigations of the Transferor Companies
o   Service of Employees of Transferor Companies
o   Dissolution of Transferor Companies
o   Main terms of transfer of assets from transferor to transferee with power to execute on behalf or for transferee the deed or documents being given to transferee
o   Conditions as to carrying on the business activities by transferor between ‘appointed date’ and ‘effective date’
o   Description of happenings and consequences of the scheme coming into effect on effective date
o   Share capital of transferor company specifying authorized capital, issued capital and subscribed and paid-up capital ;
o   Surrender of shares by share-holder of transferor company for exchange into new share certificates ;
o   Conditions about payment of dividend, ranking of equity shares pro-rata dividend declaration and distribution ;
o   Status of employees of the transferor companies from effective date and the status of the provident fund, gratuity fund, super annuity fund or any special scheme or funds created or existing for the benefit of the employees;
o   Treatment on effective date of any debit balance of transferor company balance sheet ;
o   Miscellaneous provisions covering income-tax dues, contingencies and other accounting entries deserving attention or treatment ;
o   Commitment of transferor and transferee companies towards making applications/ petitions U/s-391 and 394 and other applicable provisions of the Companies Act, 1956 to their respective High Courts ;
o   Enhancement of borrowing limits of the transferee company upon the scheme coming into effect ;
o   Transferor and transferee companies give assent to change in the scheme by the court or other authorities under the law and exercising the powers on behalf of the companies by their respective Boards ;
o   Description of powers of delegatee of transferee to give effect to the scheme;
o   Qualification attached to the scheme, which require approval of different
agencies, etc ;
o   Description of revocation/ cancellation of the scheme in the absence of
o   approvals qualified in Clause-XX above not granted by concerned authorities;
o   Statement to bear costs etc, in connection with the scheme by the transferee company ;

ADDITIONAL REQUIREMENTS FOR LISTED COMPANIES- CLAUSE 24
Ø  File the scheme with the SE, for approval, at least a month before it is presented to the Court
Ø  Explanatory statement u/s 393 should contain
Ø  pre and post pre and post-arrangement or amalgamation (expected) capital arrangement or amalgamation (expected) capitalstructure
Ø  shareholding pattern
Ø  Obtain “fairness opinion” from an Independent merchant b k l ti f t / h d b th l bankers on valuation of assets/shares done by the valuer.
Ø
While submitting the scheme with the SE, also submit an auditors’ certificate to the effect that the accounting treatment contained in such schemes is in compliance with all the applicable Accounting Standards.

- June 25, 2020
Dear all, as you know that we have initiated this process of posting of vacancies a few months back for the interest of both the employers and the job seekers, this list of vacancies is prepared based on the Google Form filed by the professionals throughout the country.  Our motive is to lift our profession by helping our professional colleagues through circulating these vacancies.   Therefore, it's a humble request from the users of this list, please verify the details of the vacancy on the email id mentioned in the particular vacancy on your own.  Further, in case of any vacancy being filed mistakenly by any person for any Company or a Firm (as the vacancies are being filed unanimously) kindly inform us on our WhatsApp no. 8130657778. we will immediately remove the same. Type of Entity Address Email ID Contact Details Specific Description of Vacancy CTC / Stipend offered Company Mumbai k
Read more

Draft Format of …….. DIRECTOR’ REPORT OTHER THAN One Person Company & Small Company Ø   The Board’s Report of Companies shall be prepared based on the STANDALONE FINANCIAL STATEMENT of the company and and should relate to the financial year for which such financial statement is prepared. Ø   The Board’s Report should avoid repetition of information. If any information is mentioned elsewhere in the financial statement, a reference thereof should be given in Board’s Report instead of repeating the same Ø   The Companies Act, 2013, mandates certain disclosures to be made in the Board’s Report. A listed company is also required to comply with certain additional requirements as stated under the Securities and Exchange Board of India (Listing Obligations and Disclosure Requirements) Regulations, 2015. However, in this writeup disclosure about listed companies are not covered. In addition to the disclosure requirements prescribed in this Standard, some secto
Read more