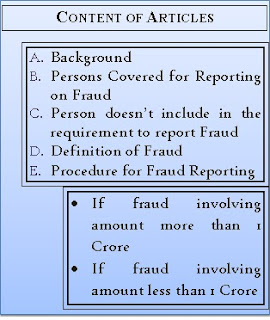 [1]Financial fraud is a phenomenon that haunts everyone alike. Not only does it mean loss of an asset for the one who has been at the receiving end of a fraud, it has the capability of shaking the roots of “confidence” and “trust” that anchor a society and/or an economy. Governments and other policy makers therefore remain keen to control the menace
The Companies (Amendment) Act, 2015 is a harbinger of positive trends in the ease of doing business for Indian companies. This post is specifically with regard to Section 143 of the Companies Act, 2013 concerning the power and duties of auditors and its amendment thereof.
Prior to the new Companies Act, 2013 Fraud was largely seen as a broad legal concept. The old Companies Act already provides punishment for fraudin various sections but the new Act has come with more specific and clear provisions relating to fraud and fraud reporting. The scope and coverage is very wide unlike Companies Act, 1956.

Auditors have always had an important role to play in enhancing the credibility of the financial information. With the introduction of section 143(12) of the Companies Act, 2013, the Central Government is apparently seeking the support of the auditors in bringing in greater transparency and discipline in the corporate world to protect the interests of the shareholders as also the public, at large.
The increasing rate of whitecollar crimes demands stiff penalties, exemplary punishments, and effective enforcement of law with the right spirit. Our country has also witnessed several corporate Frauds, few of them being the 5000 crore rupees Harshad Mehta scam in 1992, 7000 crore rupees Satyam fiasco in 2009, the 27000 crore rupees Sahara fraud case which started in 2010 and is subjudice in Supreme Court, till date.

v  Person doesn’t include in the requirement to report Fraud:
The provisions of Section 143(12) do not apply to other professionals who are rendering other services to the company. For example, Section 143(12) does not apply to auditors appointed under other statutes for rendering other services such as tax auditor appointed for audit under Income-tax Act; Sales Tax or VAT auditors appointed for audit under the respective Sales Tax or VAT legislations
.
v  Fraud covered Under 143
Its includes only fraud by officers or employees of the company and does not include fraud by third parties such as vendors and customers.

v  Definition of fraud:
Fraud has been defined as, “Fraud in relation to affairs of a company or any body corporate, includes any act, omission, concealment of any fact or abuse of position committed by any person or any other person with the connivance in any manner, with intent to deceive, to gain undue advantage from, or to injure the interests of, the company or its shareholders or its creditors or any other person, whether or not there is any wrongful gain or wrongful loss. ‘Wrongful gain’ means the gain by unlawful means of property to which the person gaining is not legally entitled and ‘wrongful loss’ means the loss by unlawful means of property to which the person losing is legally entitled.” It is the first time that the Act defines fraud and also imposes civil and criminal liability on the fraudster for non-compliance.
v  Fraud is also defined in Section 17 of Indian Contract Act, 1872 as follows:
“Fraud” means and includes any of the following acts committed by a party to a contract, or with his connivance, or by his agents, with intent to deceive another party thereto his agent, or to induce him to enter into the contract;

(1) the suggestion as a fact, of that which is not true, by one who does not believe it to be true;
(2) the active concealment of a fact by one having knowledge or belief of the fact;
(3) a promise made without any intention of performing it
(4) any other act fitted to deceive;
(5) any such act or omission as the law specially declares to be fraudulent.

v  Required Professional Skepticism and follow SAs Requirements
For Detection of fraud professional required to use their professional skepticism while doing audit. It may be possible not to detect acts that have intent to injure the interests of the company or cause wrongful gain or wrongful loss, unless the financial effects of such acts are reflected in the books of account/financial statements of the company. For example,
An auditor may not be able to detect if an employee is receiving pay-offs for favouring a specific vendor, which is a fraudulent act, since such pay-offs would not be recorded in the books of account of the company
Therefore, the auditor shall consider the requirements of the SAs, insofar as it relates to the risk of fraud, including the definition of fraud as stated in SA 240, in planning and performing his audit procedures in an audit of financial statements to address the risk of material misstatement due to fraud.

Reporting of frauds by auditor involving amount more than Rs. 1 crore
If an auditor of a company, in the course of the performance of his duties as statutory auditor, has reason to believe that an offence of fraud, which involves or is expected to involve individually an amount of rupees one crore or above, is being or has been committed against the company by its officers or employees, the auditor shall report the matter to the Central Government.
Auditor should report such frauds as soon as possible but not later than 62 days of his knowledge about the frauds:

STEP-I
REPORT TO BOARD & AUDIT COMMITTEE:
Auditor shall forward his report to the Board of Directorsor the Audit Committee, as the case maybe, within 2 days of his knowledge of the fraud, seeking their reply orobservations within 45 forty-five days;

STEP-III
Report to government if no reply received
In case the auditor fails to get any reply or observations from the Board or the Audit Committee within the stipulated period of 45(forty-five days), he shall forward his report tothe Central Government alongwith a note containing the details of his report that wasearlier forwarded to the Board or the Audit Committee for which he failed to receiveany reply or observations within the stipulated time.

Reporting of frauds by auditor involving amount less than Rs. 1 crore
·        Sub-rule (3) of revised Rule 13 of the Companies (Audit and Auditors) Rules, 2014 Provides that in case of fraud involving an amount less than Rs. 1 Crore, the auditor shall report the matter of fraud to the Audit Committee or to the Board within 2 days of his knowledge of the fraud.
·        The report should specify the nature of the fraud with description, approximate amount of the fraud and parties involved in the fraud.
·        In such case, as per Sub-rule (4), the Board shall disclose in its report (Board's Report) the nature of fraud with description, approximate amount of the fraud, parties involved in the fraud and remedial action taken.
·        Name of parties should be disclosed only when the Board or Audit Committee has not taken any remedial action against the fraud.


[1]With regard to fraud materiality, there has been some development in the United States. In Amgen Inc. v. Connecticut Retirement Plans & Trust Funds,[1] the Supreme Court stated that a plaintiff is not required to prove the materiality of fraud/misrepresentation in order to obtain class certification. Class certification is a process by which a certain set of people are grouped together as a ‘class’ for the purpose of a class action suit under Rule 23 of the Federal Rules of Civil Procedure. This ruling will greatly benefit plaintiffs in the United States.