Showing posts from June, 2016
Show all

Instruments of investments in FDI: 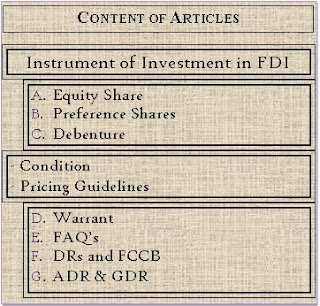 General Condition of Foreign Direct Investment (FDI) Consolidated FDI Policy  (Effective from June 07, 2016) Department of Industrial Policy and Promotion Ministry of Commerce and Industry Government of India come with circular for consolidated policy of FDI. This consolidated policy effective from 7th June, 2016. Consolidated FDI Policy Circular is a policy framework on Foreign Direct Investment, which consolidates all Press Notes/Press Releases/Clarifications/ Circulars issued by DIPP, which are in force. The first Circular was issued in March, 2010, which has been updated periodically. The last such Circular was released on 12.05.2015. ‘Consolidated FDI Policy Circular of 2016’ is the ninth edition of the series. FDI Policy Circular, 2016 has been made simpler and investor friendly; and will serve as a ready reference for foreign investors on various provisions of the FDI policy.   Meaning of FDI: FDI means investment by below mentioned the capital of an Indi
11 comments
Read more
More posts