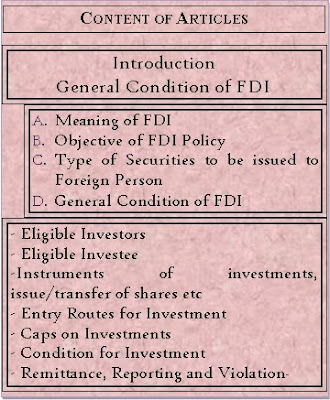 FDI Policy Circular, 2016 has been made simpler and investor friendly; and will serve as a ready reference for foreign investors on various provisions of the FDI policy.

Meaning of FDI: FDI means investment by below mentioned the capital of an Indian Company:-
·         Non- resident entity
·         Person resident outside India

OBJECTIVES:
§ Economic Growth: It is the intent and objective of the Government of India to attract and promote foreign direct investment in order to supplement domestic capital, technology and skills, for accelerated economic growth.
It is also for “Make in India”

The clauses corresponding to the following Press Notes have been incorporated in the Consolidated FDI Policy Circular of 2016.

§ Equity Shares: The equity shares issued in accordance with the provisions of the Companies Act, as applicable, shall include equity shares that have been partly paid 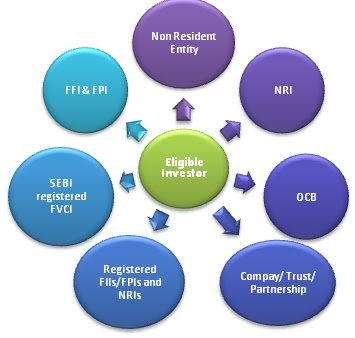 I.      A [1]non-resident entity can invest in India, subject to the FDI Policy except in those sectors/activities which are prohibited.

II.      A Non Resident Indian (NRI):
§ Citizen of Nepal & Bhutan: NRIs resident in Nepal and Bhutan as well as citizens of Nepal and Bhutan are permitted to invest in the capital of Indian Companies on repatriation basis.
§ Condition: The amount of consideration for such investment shall be paid only by way of inward remittance in free foreign exchange through normal banking channels.

III.      A Overseas Corporate Body (OCBs): [2]OCBs which are incorporated outside India and are not under the adverse notice of RBI can make fresh investments under FDI Policy as incorporated non-resident entities.

IV.      Company/ Trust/ Partnership:
A Company, trust and partnership firm incorporated outside India and owned and controlled by NRIs can invest in India with the special dispensation as available to NRIs under the FDI Policy.

Condition:
§  Such subscriptions are made through normal banking channels and
§  The person is eligible to invest as per the provisions of the PFRDA Act.
§  The annuity/ accumulated saving will be repatriable

**SEBI registered FVCIs are also allowed to invest under the FDI Scheme, as non-resident entities, in other companies, subject to FDI Policy and FEMA regulations

Condition:
§  Such investments shall also be subject to the extant FEMA regulations and extant FDI policy including sectoral caps, etc.
§  The investment can be made in equities or equity linked instruments or debt instruments issued by the company (including start-ups and if a startup is organised as a partnership firm or an LLP, the investment can be made in the capital or through any profit-sharing arrangement) or units issued by a VCF or by a Category-I AIF
§  either through purchase by private arrangement either from the issuer of the security or from any other person holding the security or on a recognised stock exchange.

Domestic Asset Management Company: It may also set up a domestic asset management company to manage its investments.

Condition:
§  Which limits the individual holding of an FII/FPI below 10% of the capital of the company; and
§  The aggregate limit for FII/FPI investment to 24% of the capital of the Company.
§  Increase more than 24%: This aggregate limit of 24% can be increased to the Sectoral cap/statutory ceiling, as applicable, by the Indian company concerned through a resolution by its Board of Directors followed by a special resolution to that effect by its General Body and subject to prior intimation to RBI
§  The aggregate FII/FPI investment, individually or in conjunction with other kinds of foreign investment, will not exceed Sectoral/statutory cap.

Reporting requirement of Company:
An Indian company which has issued shares to FIIs/FPIs under the FDI Policy for which the payment has been received directly into company’s account should report these figures separately under item no. 5 of Form FC-GPR.

Reporting Custodian Bank:
A daily statement in respect of all transactions (except derivative trade) has to be submitted by the custodian bank in soft copy in the prescribed format directly to RBI and also uploaded directly on the OFRS web site. (https://secweb.rbi.org.in/ORFSMainWeb/Login.jsp). 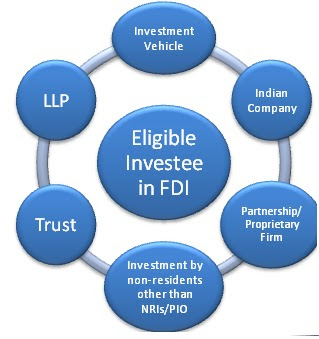 I.         FDI in an Indian Company:
Indian companies can issue capital against FDI

II.         FDI in Partnership Firm/Proprietary Concern:
A.     A Non-Resident Indian (NRI) or a Person of Indian Origin (PIO) resident outside India can invest in the CAPITAL of a firm or a proprietary concern in India on non-repatriation basis :

Condition:
§ Amount is invested by inward remittance or out of NRE/FCNR(B)/NRO account maintained with Authorized Dealers/Authorized banks.
§ Restricted Activity: The firm or proprietary concern is not engaged in any agricultural/plantation or real estate business or print media sector.
§ Amount invested shall not be eligible for repatriation outside India

C.     Investment by non-residents other than NRIs/PIO:

§ Prior Approval of RBI: Person resident outside India other than NRIs/PIO may make an application and seek prior approval of Reserve Bank for making investment in the capital of a firm or a proprietorship concern or any association of persons in India
§ Consultation with GOVT of India: The application will be decided in consultation with the Government of India.
§ Restricted Activity: An NRI or PIO is not allowed to invest in a firm or proprietorship concern engaged in any agricultural/plantation activity or real estate business or print media. 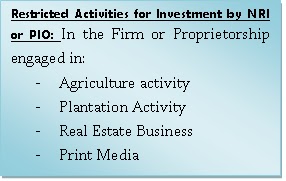 III.         FDI in Trust:
FDI is not permitted in Trusts
Except: ‘VCF’ registered and regulated by SEBI and ‘Investment vehicle’ can invest in the Trust.

Condition:
§ Automatic Route:
-   FDI is permitted under the automatic route in Limited Liability Partnership (LLPs) operating in sectors/activities where 100% FDI is allowed, through the automatic route and
-   There are no FDI-linked performance conditions.

§ Down Stream Investment:
-   An Indian company or an LLP, having foreign investment, is also permitted to make downstream investment in another company or LLP in sectors in which 100% FDI is allowed under the automatic route and
-   There are no FDI-linked performance conditions

Condition:
Downstream investment only in LLP or Company which are working in the section in which are 100% FDI allowed.

§ FDI in LLP is subject to the compliance of the conditions of LLP Act, 2008

V.         FDI in other Entities:
FDI in resident entities other than those mentioned above is not permitted.

Meaning:
An entity being ‘investment vehicle’ registered and regulated under relevant regulations framed by SEBI or any other authority designated:-

Is permitted to receive foreign investment from a person resident outside India (other than an individual who is citizen of or any other entity which is registered / incorporated in Pakistan or Bangladesh), including an Registered Foreign Portfolio Investor (RFPI) or a non-resident Indian (NRI).

§ Types of instruments for investment and provisions relating to issue/ transfer of shares are given at [3]Annexure 2 & Annexure 3 respectively.
§ Specific conditions of compliance for certain cases are given in Annexure-4.

Automatic Route: Under the Automatic Route, the non-resident investor or the Indian company does not require any approval from Government of India for the investment.

Caps on Investments
Investments can be made by non-residents in the capital of a resident entity only to the extent of the percentage of the total capital as specified in the FDI policy (will discuss in separate article).

Entry Conditions
Investments by non-residents can be permitted in the capital of a resident entity in certain sectors/activity with entry conditions. Such conditions may include norms for minimum capitalization, lock-in period, etc. The entry conditions in various sectors/activities are detailed in Chapter 5 of the Circular (will discussed separately).

Other Conditions:
The investment/investors are required to comply with all relevant
§  Sectoral Laws,
§  Regulations,
§  Rules,
§  Security Conditions,
§  and State/Local Laws/Regulations

Remittance, Reporting and Violation
The Government has provided elaborated scheme for remittance, reporting and violation of FDI policy. These are available at Annexure-6.

[1] ‘Non-resident entity’ means a ‘person resident outside India’ as defined under as defined at Section 2(w) of FEMA, 1999.
[2] OCBs have been derecognized as a class of investors in India with effect from September 16, 2003.
[3] In detailed discussed in article No. 159.

- June 25, 2020
Dear all, as you know that we have initiated this process of posting of vacancies a few months back for the interest of both the employers and the job seekers, this list of vacancies is prepared based on the Google Form filed by the professionals throughout the country.  Our motive is to lift our profession by helping our professional colleagues through circulating these vacancies.   Therefore, it's a humble request from the users of this list, please verify the details of the vacancy on the email id mentioned in the particular vacancy on your own.  Further, in case of any vacancy being filed mistakenly by any person for any Company or a Firm (as the vacancies are being filed unanimously) kindly inform us on our WhatsApp no. 8130657778. we will immediately remove the same. Type of Entity Address Email ID Contact Details Specific Description of Vacancy CTC / Stipend offered Company Mumbai k
Read more

Draft Format of …….. DIRECTOR’ REPORT OTHER THAN One Person Company & Small Company Ø   The Board’s Report of Companies shall be prepared based on the STANDALONE FINANCIAL STATEMENT of the company and and should relate to the financial year for which such financial statement is prepared. Ø   The Board’s Report should avoid repetition of information. If any information is mentioned elsewhere in the financial statement, a reference thereof should be given in Board’s Report instead of repeating the same Ø   The Companies Act, 2013, mandates certain disclosures to be made in the Board’s Report. A listed company is also required to comply with certain additional requirements as stated under the Securities and Exchange Board of India (Listing Obligations and Disclosure Requirements) Regulations, 2015. However, in this writeup disclosure about listed companies are not covered. In addition to the disclosure requirements prescribed in this Standard, some secto
Read more