Showing posts from November, 2016
Show all

Guidelines for replacement of existing Rs 500 and Rs 1000 notes with new notes and to understand the procedure of scheme and relevant provisions of Income Tax. 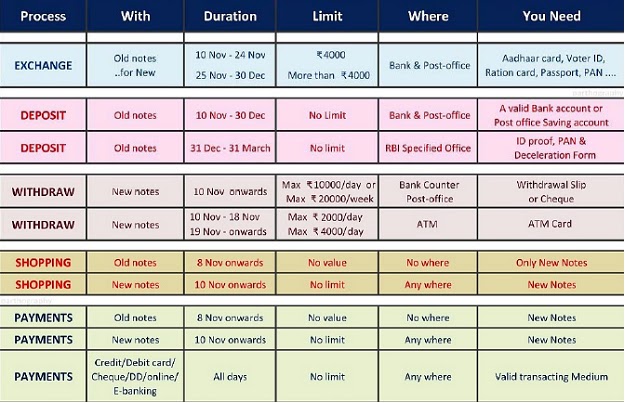 Guidelines for replacement of existing Rs 500 and Rs 1000 notes with new notes and to understand the procedure of scheme and relevant provisions of Income Tax. 1)       In terms of Gazette Notification No 2652 dated November 08, 2016 issued by Government of India, Rs. 500 and Rs. 1,000 denominations of Bank Notes of the existing series issued by Reserve Bank of India (hereinafter referred to as Specified Bank Notes) shall cease to be legal tender with effect from 9th November, 2016, to the extent specified in the Notification. Objective With a view to curbing financing of terrorism through the proceeds of Fake Indian Currency Notes (FICN) and use of such funds for subversive activities such as espionage, smuggling of arms, drugs and other contrabands into India, and for eliminating Black Money which casts a long shadow of parallel economy on our real economy, it has been decided to cancel the legal tender character of the High Denomination bank notes of Rs.500 and Rs.1000
1 comment
Read more
More posts