Section 164 (2) No person who is or has been a director of a company which—
(a) has not filed financial statements or annual returns for any continuous period of three financial years;

shall not be eligible to be re-appointed as a director of that company or appointed in other company for a period of five years from the date on which the said company fails to do so.

Therefore, if a company fails to file its financial statement for continue 3 financial year Director shall be disqualified for next 5 years.

Section 167(1)(a) The office of a director shall become vacant in case— (a) he incurs any of the disqualifications specified in section 164;

Provided that where he incurs disqualification under sub-section (2) of section 164, the office of the director shall become vacant in all the companies, other than the company which is in default under that sub-section.

Therefore, if a person disqualified in any Company due to section 167(1) such person shall be considered as Ceased in all other Companies wherever he was appointed as Director.

One can opine that:

Disqualified Director can’t continue as Director in Companies. He shall be considered as ceased with immediate effect.

If such Person continues as director even after vacation such person shall be liable for Imprisonment or fine.

If a person, functions as a director even when he knows that the office of director held by him has become vacant on account of any of the disqualifications specified in subsection (1), he shall be punishable with imprisonment for a term which may extend to one year or with fine which shall not be less than one lakh rupees but which may extend to five lakh rupees, or with both.

Entry in Register of Members about disqualification/ vacation of Director.

One can opine that:

It is responsibility of the remaining Directors to file e-form DIR-12 for cessation of Disqualified Director and inform ROC about the same.

If Directors fails to file DIR-12 they are liable for fine as mentioned below.

As per Section 166 it is duties of Directors of Company to comply with provisions of Act, act in good faith etc.  If a director of the company contravenes the provisions of this section such director shall be punishable with fine which shall not be less than one lakh rupees but which may extend to five lakh rupees.

One can opine that:
Once a director is disqualified, and then disqualified for next 5 years. There is no way out for removal of Disqualification of Director. 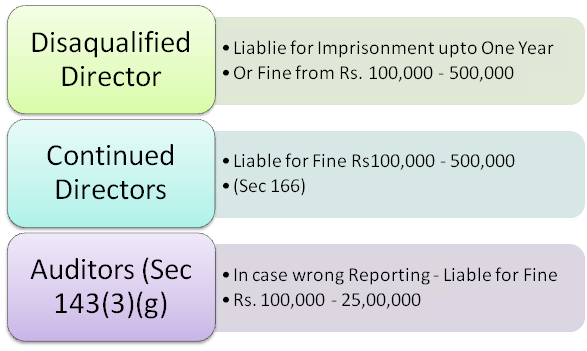 A.     What shall be effective date of Disqualification?

Date of disqualification shall be actual date when filing of financial statement for third financial year become due.

Date as mentioned in ROC list is not actual date of disqualification. Disqualification may be any date before that due to Section 164(2).

B.     Whether Company required obtaining resignation from the disqualified Director?

There is no need of Resignation of disqualified Director. Because as per act once he disqualified he automatically ceased to continue as Director.

C.     If all the Directors are disqualified, How to Company will appoint new Directors?

As per Section 167(3) in case all the directors disqualified then Promoters shall appoint the New Directors and take help of Roc for Backhand.

Author – CS Divesh Goyal, GOYAL DIVESH & ASSOCIATES Company Secretary in Practice from Delhi and can be contacted at csdiveshgoyal@gmail.com).
Disclaimer: The entire contents of this document have been prepared on the basis of relevant provisions and as per the information existing at the time of the preparation. Although care has been taken to ensure the accuracy, completeness and reliability of the information provided, I assume no responsibility therefore. Users of this information are expected to refer to the relevant existing provisions of applicable Laws. The user of the information agrees that the information is not a professional advice and is subject to change without notice. I assume no responsibility for the consequences of use of such information. IN NO EVENT SHALL I SHALL BE LIABLE FOR ANY DIRECT, INDIRECT, SPECIAL OR INCIDENTAL DAMAGE RESULTING FROM, ARISING OUT OF OR IN CONNECTION WITH THE USE OF THE INFORMATION